It’s natural, as we grow older, to have a bit more fear (at least, I feel it is). As a child, we  didn’t know all the ramifications – we could fall and get hurt if we did this or that, we could get emotionally hurt from xyz, we could be rejected or fail if we went after such and such goal. As we get older, and we learn more about how things work, how life happens, as we experience more struggles and challenges, there’s more to fear. As a toddler, you didn’t (hopefully) have to fear that if you went after your career dreams and failed, you may not be able to pay your rent or mortgage, or feed your family. Fewer responsibilities often meant fewer fears of what would go wrong.

As adults, we’ve been through a lot of life experiences, ups and downs, successes and failures, achievements and disappointments. We know what can go well, but we also know what can go not so well. And often times, especially when you’re dealing with depression or anxiety, it’s that “what can go wrong” that gets magnified. And often, that can lead to fear. Furthermore, because depression and anxiety often like to lie to us, clinging on to those fears and reiterating that we’ll fail or be rejected or some other concerning outcome, that fear begins to sound a lot more like fact to our brain. It slowly morphs from “but what if I fail” to simply, “I fail”. To clarify, I’m not blaming us for this. It’s our illness, doing what it does so well, grabbing hold of the most vulnerable pieces, and clamping down on them, and makes it feel impossible to see any other outcome. Furthermore, it often feels impossible that if this “worst case scenario” happens – we fail, we get rejected, we mess something up big time – that (at least in time) it’ll be OK. That maybe, in even trying and failing, we’ll move closer to where we want to be.

This is a challenge I’m actively working on with myself right now.  While I am not trampling over my fears thoroughly, I am learning a few tricks along the way that I thought I’d share.  Sometimes, in these situations, it helps me to approach things a bit backwards – look at all the awesome possibilities first, and then bring it back down slowly to “ground level”, so that maybe I can begin to work on the fear of other, less awesome, outcomes. In order to do this, I’ve been asking myself a few key questions.

So here goes a big first question. I’ll share some of my own responses to it, in case that helps you to record your own. What would you do/be/go for if fear was not holding you back?

To clarify, this isn’t a “perfect world” scenario. It’s simply, “if you are who you are, where you are, with all that is you, but without xyz fear(s) holding you back.”  As promised, here are a few of mine – they range from the mundane to the big, because we (or at least I) have all kinds of fears, and big or small, they can hold us back.

As you can see, there are some big items, and some seemingly silly items. “If you weren’t afraid, you’d cook?” you might ask. Yes.  I’m so afraid I’ll mess it up, do it “wrong”, embarrass myself (I don’t even know what this means in relation to cooking but it’s a fear), set off the smoke detectors because I’m burning something, etc. And it may not seem like something that’s holding me back, but I hate feeling like I can’t do simple things, and it wreaks havoc on my self-confidence and self-esteem. So whatever your list entails, don’t cross it off because it seems silly or unimportant or like it can’t possibly be holding you back. If it came to your mind, it’s important. Plus, these “silly” fears play an important role in getting us “over the fear hump”, which I’ll discuss later on. 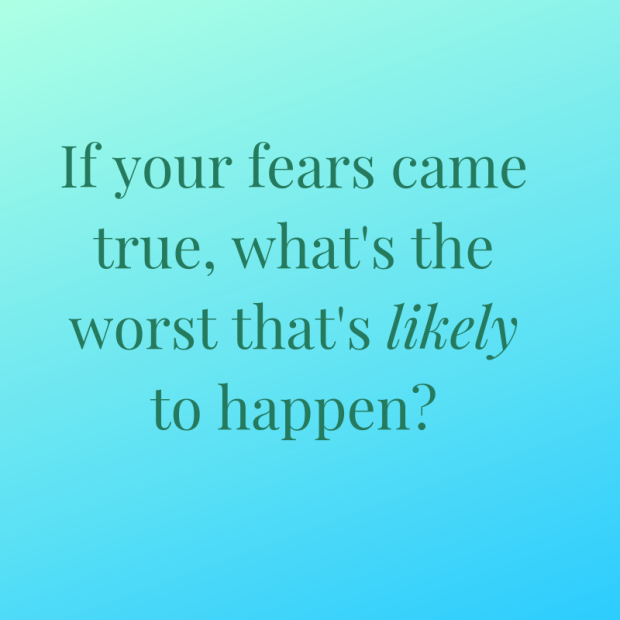 If you try and your fear comes true, what’s the worst that’s likely to happen?

1.) I’m not talking about fears of serious life events – like fear of losing a loved one, or of serious illness or injury.  Obviously, when it comes to serious impacts on our lives and health like this, we have to consider these serious possibilities. I’m talking about “What if I do try to cook that dish or to grow those plants or to make those plans with friends, and it doesn’t work out as I hope – i.e. I fail, mess up, get rejected.”

2.) Note that I say “is likely to happen”. Yes, there’s always technically the chance of the absolute worst case scenario. I could try to cook something and end up burning down my kitchen. That does happen. But the worst that’s likely to happen is I burn it, have to throw it out, and order pizza for dinner. And in the process, I’ve perhaps learned what not to do when cooking that particular item, so I have more knowledge for next time I try.

So, what’s the worst that’s likely to happen? Of course, the bigger ticket items are more risky. If I try to work for myself and it fails, then that’s a bigger problem than if I try to garden and it fails. But knowing these, even the more serious concerns, is a first step, because it helps us get a plan in place. If you’re basing your fear on past experience, is the past failure/rejection/etc actually what you think it is?

Confused? Let me explain. Real life example: The first time I cooked for my now-husband (then boyfriend) in our house, I decided to make breakfast for dinner. I knew I could make omelettes so I felt pretty solid, despite my cooking fears. And I burnt them. Horribly. Like, smoke detectors going off and scaring the dog, horribly. We had to dump them and order pizza. My brain, in those moments, turned on me faster than a sworn enemy would: See you can’t even cook the most basic things! You’re incapable. How can you be almost 40 years old and not even be able to make eggs? How pathetic!  Except what I never considered, and my (now) husband then pointed out, is that it was the first time we’d used the oven in the new house, it was a very old electric oven (I was used to gas ovens), the coils weren’t even so it wasn’t cooking proportionally, and it looked like it hadn’t been used in probably months, if not longer, so the oven itself was metaphorically rusty. In short, maybe the issue was the oven, and not me (at least here – admittedly, with some cooking, it is me). So, are the failures/rejections, mess ups, etc actually that? Or could there be another reason they’re occurring. Note: Answer this honestly. This isn’t to push away all responsibility. That’s the opposite end of the spectrum. But it could be that your fear is based off a failing or rejection or mess up that actually… isn’t. This can help dissect that. 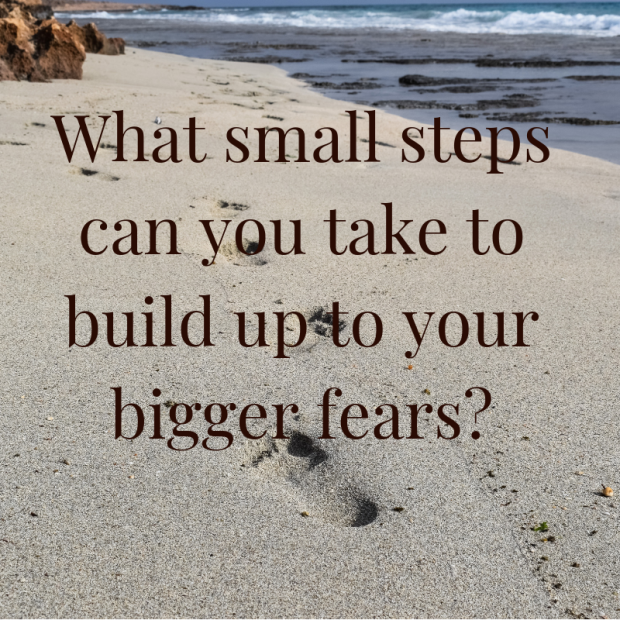 What are some small steps that you can take to work up to your bigger fears?

Another real life example: I’ve been wanting to attempt publishing my novel since I finished writing it over a year and a half ago. But I’m afraid of rejection, that it’s not good enough, and all these other things. So, this past September, my dad came up with an option: He produces Wordgathering Journal (an online journal), and suggested publishing a draft of the first chapter in the journal. Despite the fact that it’s my dad, and I trust his judgement on what’s good enough to go into the journal, it was nerve wracking – this was the first time any fiction work of mine was being put out for public consumption. But the fact that it was one chapter, and my dad was publishing it, made it less scary. Now, I’m looking into eventually self-publishing the full thing. That one small step gave me confidence to go further. It also gave me the insight to look at other options for getting my work out there – it didn’t have to be “big publisher or bust”.

So look at your fears, and see how you can break them down. It probably won’t dissipate the fears all together, but they may break down into manageable fears, as mine did above.

This is where to address those seemingly “silly” fears first. It’s way easier to think, “Tonight, I’m going to try to cook a simple dinner” than it is to say “I’m going to go for it and try to get my novel published”. These smaller things, when we start to move with the fear (note: not past it, but with it, meaning, we’re not unafraid, but we’re not frozen with fear), can help us build up to those bigger ticket items.

The bottom line is, the more we practice (thoughtfully) doing things we’re afraid of, the less frightening it becomes. I say thoughtfully here because I’m not saying “throw all caution to the wind and hope it all works out OK!” But the point is, often, one of the most frightening things is the unknown: What will happen? What if this? What if that? What if, what if, what if… But the more we practice moving forward with our fear, the more we get used to it. That’s not to say that we should just all be used to rejection and failure. Those hurt, sometimes terribly, and if we were all completely ok with every rejection we ever got, that might be just as concerning, especially when it’s on a personal level (friends, relationships).  But the more we work with our fear, the more we understand that sometimes, rejection and failure and messing up happen, and that when they do, we can get through it. And sometimes, they don’t happen. And that’s even better.

One thought on “How Do You Work With Fear?”